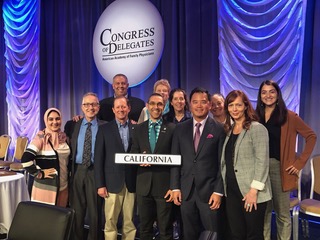 Reflections on AAFP Congress of Delegates 2020

In the best of times, the AAFP Congress of Delegates (CoD) has a comforting element of predictability.  The schedules, the events, the spectacle and even many of the topics addressed fall into a pattern that makes it easy to anticipate the next meeting. But what part of 2020 could possibly be described as predictable?  The changes required to pull off a virtual CoD this year were monumental, which made its success all the more satisfying.

With the pandemic in full swing, the AAFP Speaker substantially revamped the CoD rules in anticipation of a virtual meeting.  State delegations were limited to sponsoring no more than two resolutions addressing an ‘exigent’ topic (there have been usually no limits in past.) Though the AAFP encouraged state chapters to collaborate on resolutions, the new rules of engagement left every chapter adapting in its own way.

To appreciate the process it helps to understand the make-up of our delegation.  We have two delegates and two alternate delegates.  (That’s right, our almost 11,000 members get the same representation as Guam and the US Virgin Islands.)  However, CAFP also has members representing other AAFP constituencies through the National Conference of Constituency Leaders (NCCL) and the National Conference of Family Medicine Residents and Students. Though they represented various constituencies, all were involved in the process of crafting and carrying out California’s strategies to advocate for our issues.  Everyone had a say.

Besides taking the meeting out of Chicago and placing it in our living rooms, this year’s COD also split the proceedings over an 11-day period, with two days of reference committee hearings taking place a week before the Congress itself.  With limited time for reference committee testimony, there was ample online written testimony. The actual deliberations were held on a platform akin to Zoom on steroids, and despite the inevitable glitches, things ran smoothly.  By the time the Congress started on October 11 we had reference committee reports and an opportunity to caucus (yes, more Zoom meetings!) in order to strategize.

The actual Congress was in many ways efficient.  Gone was much of the material that fills the day at our usual meetings: speeches from visiting dignitaries, awards, recognition of recently departed members, etc.  Instead, we were largely limited to electing new leaders and debating policy in the form of resolutions, but that more than filled our time together.

Leadership elections retained much of the usual trappings, including Meet the Candidate sessions (actually more useful than the in-person version), candidate speeches, and a question-and-answer session.  That there were only three candidates for three Board positions made that election’s results a foregone conclusion, but the opportunity to hear from the candidates was still invaluable.  And the three-way race for President-Elect was eventful as always, with Dr. Sterling Ransone of Virginia victorious in the end.

On the resolution front, our delegation functioned like a well-oiled machine in spite of the newness of the process.  We were successful in passing our own two resolutions, addressing policing standards as a public health issue and promoting improved reproductive health for incarcerated persons.  Just as crucially, we testified on multiple other issues concerning equitable vaccine delivery; elimination of the X waiver for buprenorphine; AAFP’s stance on medical aid in dying (yes, again); opposition to the practice of race-based medicine; support for a national bureau to oversee firearm safety; support of gender-affirming care for trans youth; and the closure of migrant detention centers, among others.  Throughout, everyone in our delegation was actively communicating behind the scenes (thankful for sometimes hilarious group texts), covering for one another and voicing our state’s stance and priorities eloquently.

Next year’s CoD, slated to be held in Anaheim, CA, will be an in-person event. Hopefully, some of the changes and efficiencies adopted at this year’s event may lead to lasting change. We can also hope that more interstate collaboration will be the norm in the future. Regardless, in the face of previously untested processes, the CAFP’s delegation performed amazingly well, and I could not have been more proud.This year was my 12th and last as a member of CAFP’s delegation to the Congress of Delegates. The meetings have taken us from Philadelphia to Washington, Boston, Denver, San Diego, Orlando, Chicago, and New Orleans.  We’ve had the opportunity to learn, to inform, and to argue over things that matter to our members, our patients, and our communities.  We’ve watched, listened to, and helped elect many dedicated and gifted AAFP leaders.  And we’ve tried to create a culture that encourages a new generation of leaders to step up and represent us confidently.  The growth and breadth of our delegation suggest some measure of success in this.  For me, it has been a privilege and a tremendous learning opportunity, and I’d recommend it to anyone.